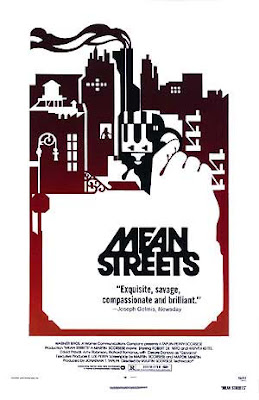 This poster for Scorseses’ Mean Streets conveys the crime genre well. The gun motif appears once again, and is some how subtly prominent. By merging it with the street, the gun becomes part of the neighbourhood and the home, and everyday thing. This could be symbolic of the gun being part of life, or even a place of safety, as your home should be. It is held up right and the barrel smokes as though it has just been fired, this conveying the violence of the film. The colour scheme follows that of generic convention, featuring blood reds and stark blacks. The block shapes have an art deco feel about them. I like the way the piece is built up of theses stencil like images and we instantly associate them with a gritty American street.
Posted by Ben Greenwood at 9:26 am