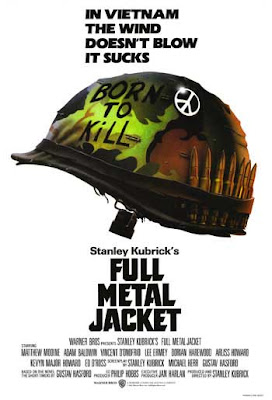 This poster proves how simplicity can be very effective. The helmet shape and camoflauge pattern are instantly representative of the Vietnam war, making the poster tell all it needs to to be intriguing but not to little to be vague. The helmet alone gives off the same mix of messages as the film itself. The bullets and 'Born to Kill' writing both symbolic of the violence, and the killing-machine attitude that the Vietnam war pressed on its young fighters, in contrast to the peace symbol, representative of hope, and anti-war prostesting. I'm still unsure why I find this poster so appealing, I supose, after reeeling through so many similar posters, this one stands out as plain yet bold, with a powerful, masculine sense about it. It is straight to the point and has a in your face appeal, almost mirroring the cockey attitudes of the some of the films soliders. This whole idea is sometime by the brilliant tagline which adds the black humour of parts of the film.
Posted by Ben Greenwood at 9:05 pm