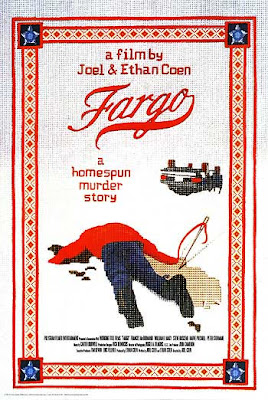 This is one of my favourite posters out of the hundreds I have looked through. I love the way it brings 'normal folk' into a twisting murder saga, by using the knitted effect. The poster conveys the black comedy of the film as well as the crime genre. The Coen brothers are known for breaking formalities and trying things that don't quite go with the norm and the poster perfectly combines everday people and murder, as does the film. The poster is very simple and the welcoming stlye of the writing and sewn border contrast with the image depicted. I like posters which stand out from the pack and this really does, I think its a very clever technique to have used and instantly portrays that 'this is going to be something different' idea.
Posted by Ben Greenwood at 4:58 pm