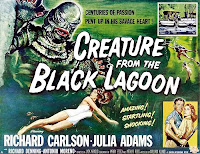 Another artist from the 1950's, whose work I have looked at is Reynold Brown. He is noted for his poster artwork and has created a great number of pieces in the film industry. His realist artwork has been used in iconc sci-fi posters of the 50's, ('The Attack of the 5oft Woman' was my poster of the week a few days back), as well as some Hollywood blockbusters.

Reynold Brown was born in 1917 in Los Angeles. He drew continuously as a child and particularly liked telling stories by drawing, comic book style, for the neighborhood children. He got a well rounded art education in Alhambra High School in California under the stewardship of a World War I veteran and artist, Lester Bonar. His skills won him a scholarship to attend art school after graduation but due to the death of his father he had to begin working to care for his mother and two younger sisters.

About 1937, with the help of Bonar, he was able to get a job inking and then drawing the syndicated comic strip by Hal Forrest, "Tailspin Tommy." This strip told the story of a barnstorming pilot, Tailspin Tommy. Brown worked on the strip until 1941.

With the outbreak of World War II, Brown was able to use his aircraft rendering skills learned from working on Tailspin Tommy to land a job with North American Aviation in California. At first he did technical illustrations for service manuals. He soon devised what were to be called phantom drawings in which aircraft were drawn with a clear skin so that the internal structure of the aircraft was visible. Brown also listened to the stories of returning aviators and used these stories as the basis of a number of illustrations which appeared in the technical manuals, advertising, North American promotional literature and its in house publication, "Skyline."The phantom drawings also appeared in Popular Aviation and Flying Magazine.

In 1946, at war's end, Brown married Tejeda. They moved to New York so he could pursue a career in illustration. His illustrations appeared in magazines such as Boys' Life, Outdoor Life, Popular Science and Argosy. He also did some of the first paperback or pocketbook illustrations. His work appeared on the covers of books by Van Tilburg Clark, (The Ox Bow Incident), William Faulkner (Sanctuary) and Erle (SP) Stanley Gardner (Perry Mason mysteries).

Working first in Temple City and later La Verne, he continued to do illustration work. He also took a teaching position at Art Center College of Design. There he would teach figure and head drawing for 26 years. Among his many students were some of today's finest artists including sculptors Hollis Williford and Richard Mac Donald, painters Gordon Snidow and John Asaro, and Illustrators Robert Peak and Dru Struzan.

In 1951, while doing a show for Art Center, Brown met Misha Kallis, an Art Director for Universal Pictures. Brown soon completed his first movie poster for Universal, The World in His Arms, featuring Gregory Peck and Ann Blyth. That began a series of over 250 campaigns for Universal, MGM, Disney and American International Pictures (AIP). Brown's work was used to promote classics like Ben Hur and Spartacus, westerns such as The Alamo and Taza, Son of Cochise and drama, horror, monster and science fiction films. His science fiction works for such pieces as The Time Machine and This Island Earth, as well as his monsters like The Creature from the Black Lagoon have already become popular among collectors.

While doing the movie posters Brown continued to do other illustration work for other media including a number of record jacket covers.

In the early seventies, Brown decided to take part in the developing market for fine art paintings on a western theme. Brown had always liked painting the west as a subject in his illustrations. He set aside illustration work, including poster art and concentrated on western paintings for the fine arts market. Brown's skills well developed through his many years of illustrating, made his work popular and he sold about 250 oil paintings. These covered not only the west; they included portraits, harbor scenes and landscapes. He also sold work in charcoal, pencil, pastel and watercolor.

Brown suffered a severe stroke in 1976. His left side was completely paralyzed. With the help of Mary Louise, he was able to retrain himself. Although unable to do the detailed and highly representational work of his pre-stroke years, he was none-the-less able to do produce some powerful drawings and beautiful landscape paintings of Nebraska, where he settled in 1983 and remained until his death in 1991.